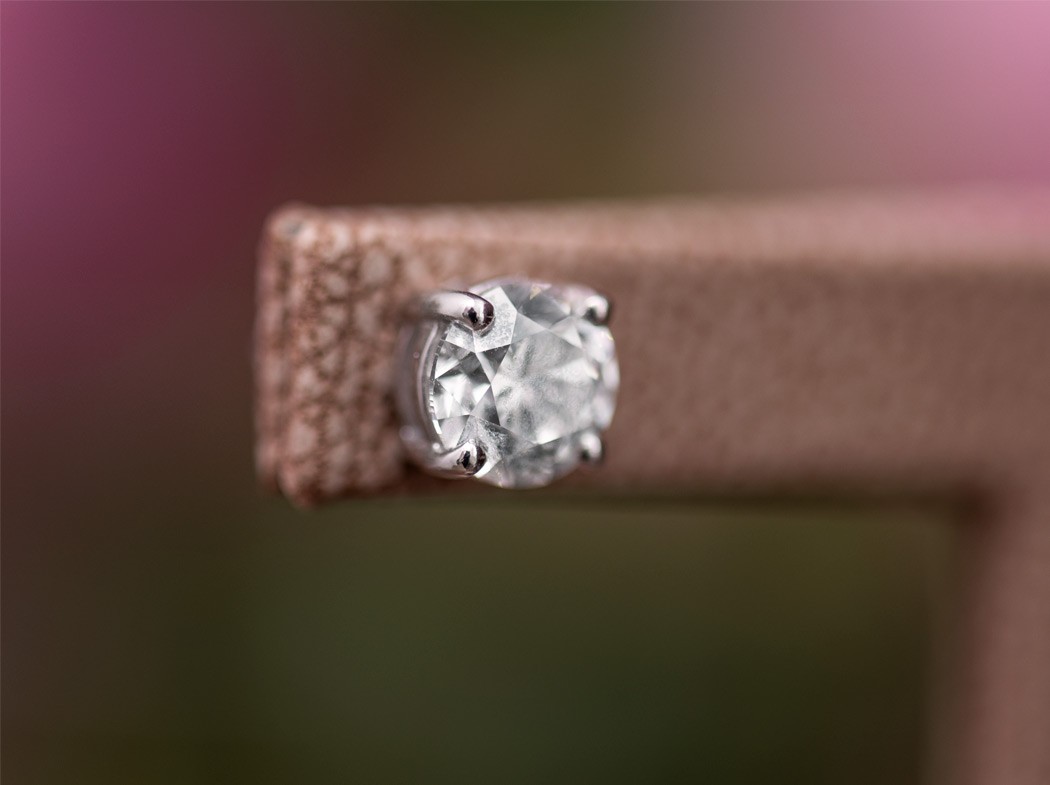 The Cut, often referred to as one of the four C’s, can be considered one of the most important in diamond grading. The cut refers to not only the shape of the diamond but the proportions of the gemstone itself. The proportions determine which angle the light enters and exits the diamond, projecting a glimmer of sparkle and fire throughout the stone.

Diamond cuts have evolved immensely over a period of hundreds of years. In the 1700s diamonds, which are rated the hardest gemstone on the Moh’s scale, were considered so hard that there was no available technology to cut them. Today, technological advancements have allowed diamond cutters to determine the exact characteristics of each stone allowing them to enhance the natural beauty with minimal waste.

The round brilliant cut diamond shown here, is famously the most traditional and has been around for many centuries. In 1919 the modern round brilliant cut was redefined by Marcel Tolkowsky who explored the specific angles and proportions which would allow the maximum amount of light, brilliance and fire to reflect through the top of the stone. An excellent cut brilliant diamond, under close inspection, will showcase an array of hearts and arrows.

To achieve an excellent round brilliant cut it is preferred to begin the process from an octahedron shaped rough diamond, quite often multiple diamonds may be cut from this same rough stone. In comparison all other diamond shapes, known as fancy cuts, are often cut from more unusually shaped rough stones. Throughout history the brilliant cut has remained both classic and timeless, accounting for more than three-quarters of all diamonds sold today.

The oval cut is a modified round brilliant. The decision to create an oval cut can often be made based upon the shape of the rough diamond and the location of its internal inclusions or characteristics. The oval and round brilliant shapes possess a similar fire and brilliance, each are usually noted to have between 56 and 58 facets. The key difference between the two cuts is the elongated shape of the oval, shown here. This shape itself presents a larger surface area than a round brilliant cut of the same carat weight, thus giving the appearance of a larger stone, the illusion of a greater size and often giving the wearer the appearance of a longer and slimmer finger.

The pear cut, often referred to as the teardrop shape, is also another modified brilliant cut. This shape sees a fusion of the marquise and the round brilliant to create a cut that is both unique and distinctive, shown here. The length to width ratio of pear cut diamonds can vary significantly based on the purpose of the stone. A narrow pear cut diamond is ideal for drop earrings whilst a wider shape may be preferred for a solitaire engagement ring.

The most famous pear cut diamond is from The Cullinan Diamond. Originally weighing 3,106 carats this rough diamond was then expertly cut to produce “The Great Star of Africa” or also known as “The Cullinan I”. This stone is the largest polished diamond in the world. It has 74 facets and weights 530.20 carats. This impressive diamond is currently on display at The Tower of London amongst The British Crown Jewels.

Once referred to as the ‘old mine cut’ the cushion cut combines a square cut diamond with rounded corners, much like a pillow, thus the name cushion. Shown here, is a cushion cut diamond set with a subtle diamond halo and split diamond shoulders. The larger facets on this cut increase the diamonds’ brilliance and sparkle. The standards for cushion cut vary more than most other diamond shapes. Often less brilliant than round brilliant diamonds, a cushion cut diamond often has a better fire thanks to its three pavilion patterns. A modern cushion cut will have one of the three basic pavilion facet patterns, the third pattern has an extra row of facets and is classified by the Gemological Institute of America as a “modified” cushion cut. The cuts which are more modified tend to have a ‘crushed ice’ or needle like facet pattern which is more similar to a radiant cut than the traditional cushion cut.

This diamond shape has been around for almost 200 years and, like the round brilliant cut, is often a popular choice. This cushion cut diamond offers the wearer an antique feel combined with a modern cut.

In the 1500s stone cutters first began the journey to create what is now amongst one of the most popular fancy cuts, the emerald cut, showcased here. Initially cut from true emeralds, this particular cut oozes elegance due to its dramatic ‘hall of mirror’ effect facets. The shape is usually less fiery than a round brilliant cut but often tends to have wider and more dramatic flashes of light. Known for its steep cut pavilion and its large open table, the emerald cut accentuates a diamonds clarity, making cuts with supreme clarity more desirable. Today, an array of famous celebrities have chosen an emerald cut as their engagement ring including, Amal Clooney and Beyonce Carter.

The radiant cut can vary in their degree of rectangularity. The modified square shape acts as a bridge between a cushion and a princess cut. The rectangular radiant cut is an excellent option for a client who is interested in the emerald cut shape but is looking for something with a brilliant nature of a round diamond. Finally, the square radiant is also a popular choice for those in search of a bright and brilliant square cut diamond. The cushion cut is especially popular for fancy coloured diamonds, such as pink, yellow or blue, because the shape, proportions and facet arrangement intensify the colour.

The Kimberley Process Certification Scheme (KPCS) was introduced in 2002, a tightly controlled system to ensure that diamonds have been purchased from legitimate sources and comply with the specific requirements listed throughout the scheme. The Kimberley Process was originally introduced due to the trading of rough diamonds to fund military conflict by rebel movements, therefore the diamonds became known as ‘blood’ or ‘conflict’ diamonds.

It is believed that diamonds were created by nature at least 990 million years ago, there are some examples which date back as far as 4.2 billion years. The fundamental forces of heat and pressure transformed carbon into diamonds 150-200 km below the surface of the earth. The volcanic mass, where crystallization takes place, is thrust upwards and breaking through the earth’s surface to cool in kimberlite, or lamproite, pipes where diamonds are found today. A diamond’s value comes from its own natural beauty as well as its rarity. Today, approximately 100 to 250 tonnes of ore can be processed from the average kimberlite pipe to produce a one carat, polished, quality gemstone.

Diamonds can be found in an array of colours that range from white and black. These colours include: fancy yellow, brown or cappuccino, green, blue, pink and the exceptionally rare red. For more information on coloured diamonds, visit the Gemological Institute of America (GIA) here.

A Symbol of Eternal Love: The Eternity Ring