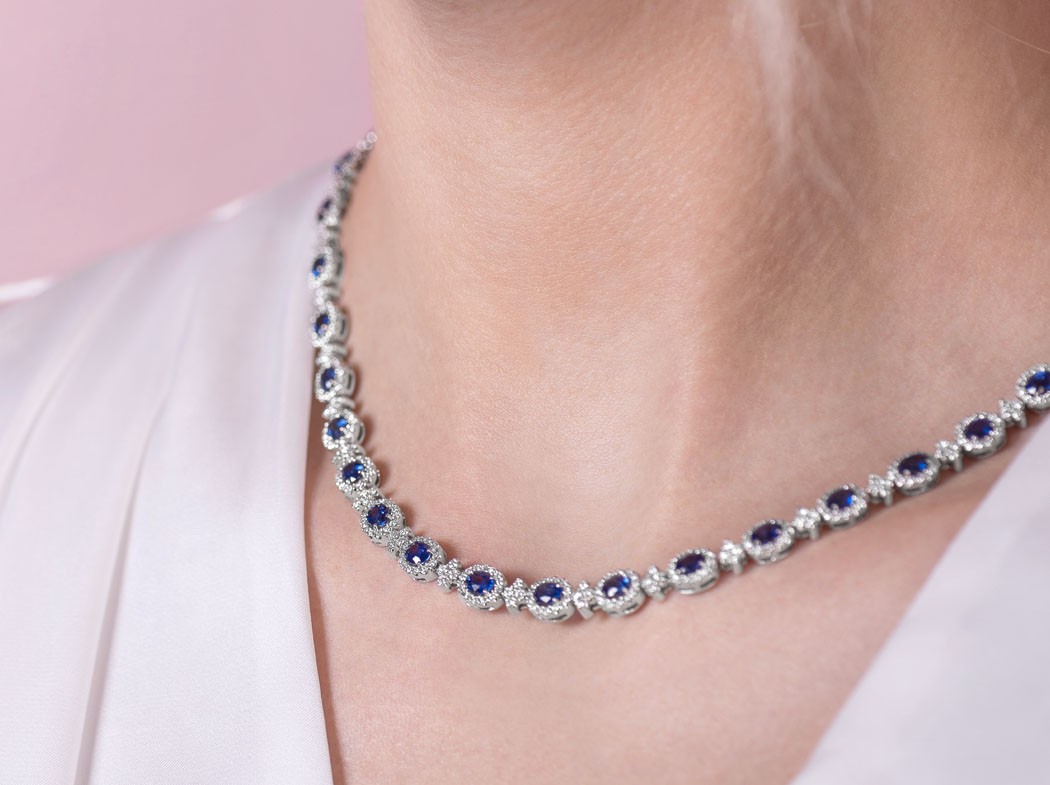 Each of our showrooms offer an extensive selection of coloured gemstones, ranging from the classics, such as sapphire, to the more unusual, such as tourmaline or tsavorite. Throughout this article we hope to explore, what are often considered, three of the most classic gemstones.

The Emerald, known for its rich green colour, is from the mineral family Beryllium aluminium silicate, commonly known as Beryl. Often considered as one of the most classic gemstone choices, the Emerald is instantly recognisable by its unique colour and nature. Emeralds are associated with a variety of both modern and ancient symbols, from love and rebirth to mental clarity and power. In addition to this, the Emerald is also the May birthstone and the gift for a 55th wedding anniversary.

Emeralds can range in colour from a subtle or warming yellow toned green through to a more vivid or rich green mixed with flashes of blue. If a customer is exploring a piece of jewellery which contains Emeralds, perhaps a necklace or a pair of earrings, they will often look at the lightness, or darkness of the stone, this often reflects both the colour of the stone but also its clarity and cut. The clarity of an Emerald, which are often known for their inclusions, can range from translucent to opaque, often the former being considered more desirable. If you would like further information on clarity, and how clarity is measured universally, there is a dedicated clarity section within Our Guide To Diamonds.

If you are considering a piece of jewellery which features a coloured gemstone, especially one such as Emerald, it is always important to consider the hardness or practically of the stone. Emeralds measure 7.5-8.0 on the Mohs scale, meaning that often, they are set amongst a diamond halo or diamond surround to add some additional protection around the stone.

Katrina Young, our jewellery designer, has created an extensive selection of Emerald rings, each of which is has been designed around the stones own shape and colour. Here, within our bespoke jewellery carousel, you can see a selection of these pieces. Our bespoke collection includes an array of incredible rare emeralds, including an exceptional 10.88ct Columbian GIA certified emerald. The Columbian Emerald, as shown in this particular piece, is usually considered of the highest quality or the most desirable due to its rich, intense and pure green colour.

The sapphire, often considered the most popular coloured gemstone choice, is a variety of the mineral corundum family and is typically a rich or vibrant blue colour, with flashes of purple and violet. Often considered as a classic and traditional choice, sapphires have often been associated with the Royal Family. Lady Diana Spencer, later Diana Princess of Wales, was given an engagement ring, originally created by British jeweller Garrard, by Charles, Prince of Wales, in 1981 which consisted of an exceptional 12.00ct oval cut sapphire with a surround including 14 brilliant white solitaire diamonds. This exquisite ring is now worn by Catherine Middleton, the Duchess of Cambridge. This is just one of the sapphire pieces passed from Diana, Princess of Wales, throughout the Royal Family, as explored here, by Tatler. In addition to their Royal association, Sapphires are also the birthstone for September and the chosen gemstone for a 45th wedding anniversary.

The sapphire is a particularly hard and durable stone, rating at 9.0 on the Mohs scale of hardness. It is important to note, that is currently recognised that the only gemstone harder than a sapphire is a diamond. It is due to this hardness that sapphires are used across a multitude of jewellery types, from earrings to necklaces from dress rings to engagement rings, as both primary and secondary stones.

It is not as commonly known that sapphires are also available in an extensive selection of ‘fancy’ colours… pink, yellow, purple, orange, green and even with multi-colours which are often referred to as ‘parti’ sapphires. These unusual colours can be used to create bespoke designs, distinctive pieces or jewellery that forms part of our exceptional ‘Rainbow’ collection which is shown across a multitude of our jewellery carousels, from necklaces & pendants to earrings.

A ruby is a pink to vibrant blood-red coloured gemstone and is also a variety of the mineral corundum, the same family that sapphires originate from. The word ruby comes from the word ‘ruber’ which is Latin for the colour red. Like sapphire and emerald, ruby has many ancient and modern symbolic associations. It is believed that rubies symbolise power and protection and according to ancient myths, as well as being the birthstone for July and the gemstone for a 40th wedding anniversary, often referred to as a ruby wedding.

The quality of a ruby, like a diamond, is determined by the 4 C’s, colour, cut, clarity and carat weight. For many, the vibrancy, depth and liveliness of the colour shown throughout the stone is the most important factor.

This particular gemstone is also well renowned for being seen on both the Royal Family and celebrities. Most famously, Elizabeth Taylor who was gifted, by Mike Todd, with a ruby and diamond suite from Cartier while they were on vacation in August 1957. The earrings, which are each set with three oval rubies and an array of round brilliant and baguette cut diamonds, were sold by Christie’s New York in an auction named ‘The Collection of Elizabeth Taylor’ for USD 782,500. In addition to the earrings, the bracelet and the necklace were also sold for USD 842,500 and USD 3,778,500 respectively.

If you are interested in exploring coloured gemstones further, or if you are perhaps considering an engagement or dress ring in a precious or semi-precious stone, then our ‘The Perfect Engagement Ring - A Twist On Tradition’ offers an exploration of even more incredible stones.