A Pioneering Wristwatch: The Rolex Submariner 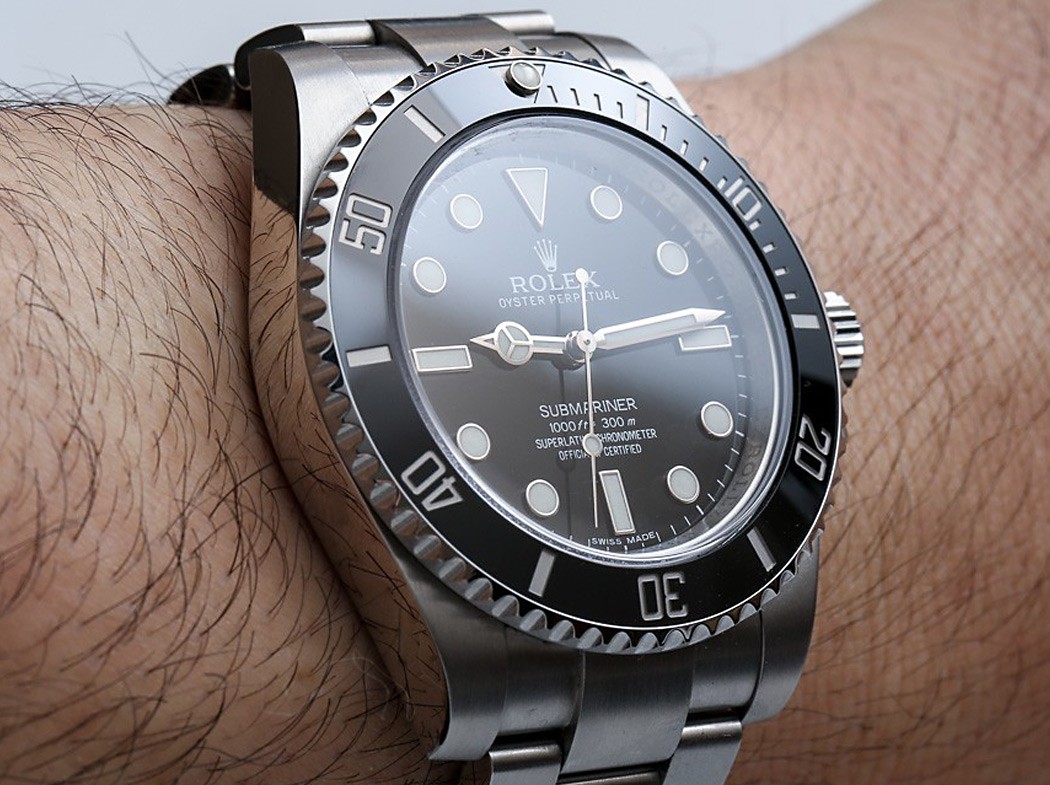 The Submariner is one of the most iconic watches in the Rolex collection and has been a staple of the brand since its birth in 1953. The pioneering wristwatch helped push the boundaries of SCUBA diving to new depths with its innovative use of a rotating bezel to help determine the time spent underwater. The legendary ‘Oyster’ case protected the ‘Perpetual’ movement from the crushing depths of the ocean and ensured the watch could be worn while diving down to 100 metres or 330 feet.

Though few wearers nowadays will use the watch for its intended underwater purpose, the Submariner remains the watch of choice for many distinguished people from all manner of different backgrounds. Rolex Testimonees, who by definition are at the pinnacle of their profession choose the Submariner as the watch they feel most appropriately expresses their personality or commemorates their finest achievements.  These include the renowned filmmaker and explorer, James Cameron, 2016 Formula One World Champion Nico Rosberg and Don Walsh, one of the first men to reach the deepest point in the Ocean in the bathyscaphe Trieste.

One of the many reasons why a Rolex wristwatch is such a famous icon is the continuation of design of the most prominent models in the Rolex family. Though the Submariner is sixty-five years old, the design has remained unerringly consistent throughout the decades – only being updated with the advent of modern materials that improve the durability or when Rolex have produced new, cutting-edge movements to power the watch. During the infancy of the Submariner, there were a few minor changes between references as the formula was refined in the 1950s – subtleties that are highly prized by collectors due to their rare nature.

A particularly interesting reference to look at is the 6536 where the little details that would come to characterize the Submariner, began to take shape. Often referred to as the ‘Small Crown’ in reference 6mm screw-down crown, the 6536 was the slimmer sibling to the ‘Big Crown’ – reference 6538 – that many people associate with James Bond as it was this watch that adorned the wrist of the fictional spy in the 1962 film, Dr. No. The 6538 received the nickname due to its slightly larger 8mm screw-down crown and generally bulkier case.

The Submariner 6536 was believed to have been put into production as early as 1956, a mere three years after the inception of the first Submariner reference 6204, and only produced until 1958, making it one of the rarest early Submariners. Featuring an improved caliber 1030 that was slimmer than the earlier Submariner movement allowed for a case that was more wearable than the previous generation – early self-winding or ‘Perpetual’ movements were quite cumbersome due to the additional weight and heft caused by the rotor. This was quite an important consideration because at the time people weren’t used to wearing large wristwatches, though today, many people enjoy watches such as the Rolex Deepsea whose case measures in at a suitably big 44mm – a fitting size considering the watch can withstand mighty depths of 3,900 metres or 12,800 feet. Features appearing for the first time on the Submariner (but not the last) on this reference are the ‘hash’ marks that delineate the first fifteen minutes on the rotatable bezel. This would help the wearer determine more precisely how much time had elapsed when looking at the bezel.

Another first on the 6536 is the red triangle located on (some, not all) rotatable bezels. This detail is often highly valued by collectors for its aesthetic beauty and perceived rarity as it is not something that features on the modern day Submariner collection. So much so that recently at a Sotheby's auction at the end of 2018, a 6536 Submariner with a red triangle bezel sold for $225,000 (the equivalent of roughly £180,000) which is a record for a ‘Small Crown’ Submariner.

Perhaps the most relevant detail and something that now is listed on the dial of each and every divers’ watch that Rolex produce today, the 6536 saw the introduction of the depth rating painted on the dial. This has evolved over the years whereby the positioning and colour of the text has changed slightly or the depth rating has swapped places with the family name of the watch to achieve the best visual balance but the depth rating remains a crucial part of the dials character. The ultimate depth gauge on a Rolex watch is the beastly Deepsea Challenge which is rated to 12,000 metres or 39,370 feet to be exact – over 1,000 metres more than the deepest point in the ocean and that’s not taking into account the fact that Rolex test their divers watches to a further 25% of their stated depth rating. The Deepsea Challenge, made in 2012 to accompany James Cameron’s dive to the deepest fathoms of the ocean, is certainly a technical and engineering marvel whose lineage can be followed all the way back to the origins of the Submariner and the reference 6536.

Another modern model that can trace its ancestry back to the 6536 and was introduced in 2012 is the Rolex Submariner reference 114060. If you were to put the two watches side-by-side, there would be absolutely no doubt that they a very similar in design despite over half a century in age difference between them. While size may have increased to a healthy 40mm and the case now features crown guards to protect the watch from any knocks to the winding crown, the two references remain immediately recognizable as Rolex Submariners - such is the enduring perfection of the Submariner design.

Where the modern Rolex watches really begin to upstage their older predecessors is in the construction and usage of high-tech materials. Modern Rolex watches are a truly incredible feat of sophisticated engineering and the development of exclusive materials over the decades has led to a wristwatch of unparalleled quality. The 114060 is equipped with the in-house caliber 3130 which is home to the Rolex patented Parachrom hairspring – an incredibly fine component made from a trilogy of anti-magnetic elements Niobium, Zirconium and Oxygen that are also impervious to radical changes in temperature. Like all modern Rolex calibers, the 3130 movement is also rigorously tested by the COSC (Swiss Official Chronometer Testing Institute) and then cased and subjected to further strict testing by Rolex to finally be awarded the industry-leading title of Superlative Chronometer. This unique process ensures that each Rolex watch exhibits an astonishing level of chronometric precision to a tolerance of +2/-2 seconds per day and that the watch is waterproof, has a sufficient power reserve and demonstrates efficient self-winding capabilities. More information on the modern calibres and testing standards an be found here.

Since the advent of sapphire crystal in the 1970s, the modern Submariner is equipped with this scratch-resistant material. Sapphire crystal is an extremely hard material, second only to a diamond in terms of hardness on the Mohs scale and is a far cry away from the ‘Plexiglas’ plastic crystals that were typical of the previous decades which marked very easily. Further improvements to the scratch-resistance and long-term visual integrity of the Submariner came in the form of a patented type of ceramic, Cerachrom, which Rolex introduced in 2005. A Cerachrom bezel is virtually scratch-proof and is impervious to UV rays – coupled with the scratch-resistant sapphire crystal mean that your cherished timepiece will look as good as new for many years to come.

The new solidly built Oyster bracelets found on the 114060 are made from Rolex’s own Oystersteel – a stainless steel super alloy that is particularly corrosion resistant with hypo-allergenic qualities and one that holds a polish beautifully. The comfort of the watch has been greatly improved since the 1950s too with the introduction of the Glidelock clasp. This allows the user to micro-adjust the bracelet so the watch fits perfectly in every situation, whether Scuba diving or travelling to a humid country. These developments all contribute to the watch’s durability and in the modern Submariner, you have a watch that will last several lifetimes.

All the improvements made to the Submariner over the years present us with a watch that has evolved gradually into the refined example of engineering we see today – a distillation of the pure Submariner design combined with the cutting-edge manufacturing techniques of Rolex Geneva.

The Submariner remains an icon of the watch world and will continue to be worn by many future generations, creating an everlasting legacy that arose from humbler times.